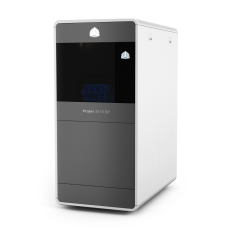 The ProJet 3510 MP is a professional 3D dental printer from 3D Systems using multi-jet modeling technology (MJM). The device is used to create master models and molds for dental prosthetics. The printer is characterized by high productivity due to the possibility of creating several hundred models in one production cycle. The device is controlled via a local network via an Ethernet connection.